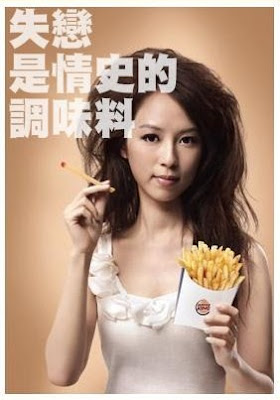 Burger King (漢堡王) on Taiwan has a new marketing campaign featuring the slogan, "A different kind of flavor." One of the images in its ads is of an attractive woman holding up a French Fry with ketchup on it like a cigarette in her right hand with a box of fries in her left hand arranged like a pack of cigarettes. At a time when the Republic of China (Taiwan) government has banned smoking in restaurants and pubs and has been warning of the dangers of smoking, an ad like this, placed repeatedly and strategically at Zhongxiao Fuxing Station (忠孝復興站), alongside one of the longest and most visible escalators in the Taipei Metro system, is irresponsible, at best.

Shame on Burger King Taiwan.
Posted by Scott Freiberger at 7:20 AM

Taipei In A Day Includes: Taiwan From A To Z NUMBER 1 in Amazon.com Category!

Taipei In A Day Includes: Taiwan From A To Z is available here, Amazon.com and at Barnes andNoble.com.

Thank you again for making Taipei In A Day Includes: Taiwan From A To Z (台北一日遊) #1 in its category, an Amazon.com Bestseller and the highest-rated Taiwan travel book on Amazon.com! --Scott
Posted by Scott Freiberger at 8:50 AM