Decided to post another article related to Japan, this one in Slate deals with how many Japanese male youth are turned off by how preceding generations defined success through bigger, better, faster and more material possessions. They're called "grass-eating men" (soushoku danshi) (literally "grass-eating boys") because they'd rather spend their time gardening, playing video games, taking walks or engaged in more solitary acts to find solace rather than, say, strolling around department stores searching for the latest imported brand name products.

"Grass-eating men" are a product of the times. They don't know whether they'll have a job in a month so they're not prone to splurge to impress friends or the opposite sex. Their rejection of the decades-old keep-up-with-the-Suzukis behavior in Japan's capitalist society is considered a "dilemma."

What do you think?
Posted by Scott Freiberger at 7:08 AM

This article pertains to Japan and not Taiwan, but with "Beer Flavor Green Tea" for sale at convenience stores and supermarkets throughout the Republic of China (Taiwan), tea-flavored Coca Cola, if tested sucessfully in Japan, can't be too far off. Also, looking forward to trying some of that basil-flavored cola from Pepsi! The article appeared here. 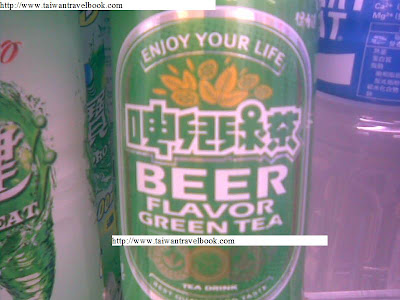 Enjoy your life trying a wide variety of unique products in
the Republic of China (Taiwan), including Beer Flavor Green Tea!
Posted by Scott Freiberger at 9:33 AM