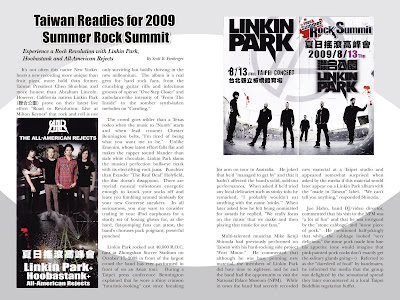 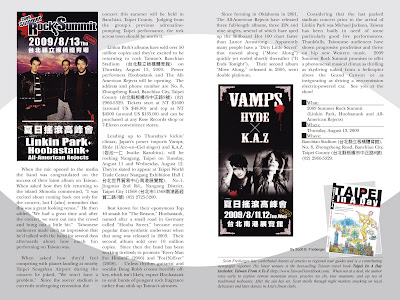 Taipei In A Day: Includes Taiwan From A To Z is available here, Amazon.com and at Barnes andNoble.com. In Taipei the book is available at Cherry Valley Bookstore, Tienmu East Road, Lane 8, #99,Tienmu, Taipei (behind TAS)(台北市士林區天母東路8巷99號) (02) 2876-9293.
Thank you again for making Taipei In A Day the highest-rated Taiwan travel book on amazon.com! --Scott
Posted by Scott Freiberger at 3:02 AM

A well-written but decidedly one-sided article published in today's New York Times delineates how many Taiwanese show "exuberance" over Taiwan's markets opening to investment from Mainland China. While it's true that President Ma has been pragmatic in his efforts to engage the Mainland both economically and politically, not everyone on the island, as the writer may lead you to believe, is thrilled about recent increased cooperation between Taiwan and the Mainland.

A little less than half the population (currently around 40%) supports the Democratic Progressive Party (DPP) (民主進步黨). Opposition candidates and "pan-green" citizens that support the party are grumbling that "President Ma Ying-jeou and the KMT are giving everything away to the Mainland..." Just ask your neighborhood taxi driver. The writer takes a decidedly pro-business slant and interviews notables in the investment community rather than candidates or supporters of the opposition political party.

To illustrate my point, Taiwan Premier Liu Chao-shiuan, in an article published the following day (Thursday, May 14), struck a far more cautious tone : "The government prefers to adopt a more conservative approach in the initial stages to allay public concerns."

Regardless, let's hope that Taiwan's markets improve along with its international relations.
Posted by Scott Freiberger at 10:52 AM 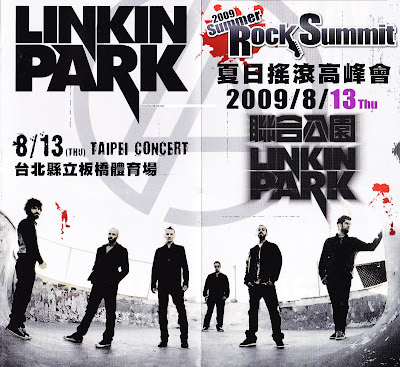 By Scott B. Freiberger


It’s not often this native New Yorker hears a new recording more unique than fruit pizza, more bold than former Taiwan President Chen Shui-bian and more honest than Abraham Lincoln. However, California natives Linkin Park (聯合公園) prove on their latest live effort “Road to Revolution: Live at Milton Keynes” that rock and roll is not only surviving but boldly thriving in the new millennium. The album is a real gem for hard rock fans, from the crunching guitar riffs and infectious grooves of opener “One Step Closer” and ambulance-like intensity of “From The Inside” to the somber synth-laden melodies on “Crawling.” 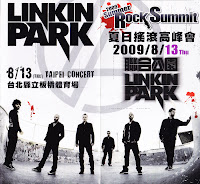 The crowd goes wilder than a Texas rodeo when the music to “Numb” starts and when lead crooner Chester Bennington belts, “I'm tired of being what you want me to be.” Unlike Emenim, whose latest effort falls flat and makes the rapper sound blander than stale white chocolate, Linkin Park slams the musical perfection bulls-eye mark with its electrifying rock jams. Punchier than Evander “The Real Deal” Holyfield, the disc doesn’t disappoint. There are myriad musical milestones energetic enough to knock your socks off and leave you fumbling around aimlessly for your new Converse sneakers. In all seriousness, you may want to consider trading in your iPod earphones for a sturdy set of boxing gloves for, as die-hard, fist-pumping fans can attest, the band’s choruses pack poignant, powerful punches!

Linkin Park rocked out 40,000 R.O.C. fans at Zhongshan Soccer Stadium on October 17, 2008 in front of the largest crowd the band has ever performed in front of on an Asian tour. During a Taipei press conference Bennington explained that he wore a shiny crimson “futuristic-looking” cast since breaking his arm on tour in Australia. He joked that he’d “managed to get by” and that it hadn’t affected the band’s solid, sold-out performances. When asked if he’d tried any local delicacies such as stinky tofu he remarked, “I probably wouldn’t eat anything with the name ‘stinky.’” When later asked how he felt being nominated for awards he replied, “We really focus on the music that we make and then playing that music for our fans.”

Multi-talented musician Mike Kenji Shinoda had previously performed on Taiwan with his hard-rocking side project “Fort Minor.” He commented that although he was busy penning new material, the members of Linkin Park did have time to sight-see, and he and the band had the opportunity to visit the National Palace Museum (NPM). While in town the band had secretly recorded new material at a Taipei studio and appeared somewhat surprised when asked by the media if this material would later appear on a Linkin Park album with the “made in Taiwan” label. “We can’t tell you anything,” responded Shinoda.

Joe Hahn, band DJ/video director, commented that his visit to the NPM was “a lot of fun” and that he was intrigued by the “stone cabbage” and “stone piece of pork.” He mentioned half-jokingly that while the cabbage looked “very delicious,” the stone pork made him lose his appetite (one would imagine that pink-painted pork rocks don’t exactly get the salivary glands going…) Referred to as the “daredevil of food” by bandmates, he informed the media that the group was delighted by the sensational spread they later encountered at a local Taipei Buddhist vegetarian buffet.

When the mic opened to the media the band was congratulated on the success of their latest album on Taiwan. When asked how they felt returning to the island Shinoda commented, “I was excited about coming back not only for the concert, but I [also] remember that this was a great looking venue.” He then added, “We had a great time and after the concert, we went out into the crowd and hung out a little bit.” Taiwanese audiences made such an impression that he’d talked with the band for several days afterwards about how much fun performing on Taiwan was.
When asked how they’d feel competing with planes landing at nearby Taipei Songshan Airport during the concert he joked, “We won’t have a problem.” Since the soccer stadium is currently undergoing renovation the concert this summer will be held in Banchiao, Taipei County. Judging from the group’s previous adrenaline-pumping Taipei performance, the trek across town should be worth it.
Linkin Park’s albums have sold over 50 million copies and they’re excited to be returning to rock Taiwan’s Banchiao Stadium (台北縣立板橋體育館) on Thursday, August 13, 2009. Power performers Hoobastank and The All-American Rejects will be opening. The address and phone number are No. 8, Zhongzheng Road, Banchiao City, Taipei County (台北縣板橋市中正路8號) (02) 2966-5329. Tickets start at NT $1600 (around US $48.00) and top at NT $4500 (around US $135.00) and can be purchased at any Rose Records shop or 7-Eleven convenience stores.
Leading up to Thursday’s kickin’ climax, Japan’s power imports Vamps, Hyde (L'Arc~en~Ciel singer) and K.A.Z. (岩池一仁 Iwaike Kazuhito), will be rocking Nangang, Taipei on Tues

Best known for their eponymous Top 40 smash hit “The Reason,” Hoobastank, named after a small road in Germany called “Hooba Street,” became more popular than synthetic underwear when that song was released in 2003. Their second album sold over 10 million copies. Since then the band has been working tirelessly to promote “Every Man For Himself” (2006) and “For(N)Ever” (2008). Unless rhythm guitarist and vocalist Doug Robb croons horribly off-key, which isn’t likely, expect Hoobastank to emit bursts of pungent rock fragrance rather than stink up Taiwan’s airwaves.

Since forming in Oklahoma in 2001, The All-American Rejects have released three full-length albums, three EPs and nine singles, several of which have sped up the Billboard Hot 100 chart faster than Lance Armstrong. Apparently many people have a “Dirty Little Secret” that moved along (“Move Along”) quickly yet ended shortly thereafter (“It Ends Tonight”). Their second album “Move Along,” released in 2005, went double platinum.

Considering that the last packed stadium concert prior to the arrival of Linkin Park was Michael Jackson, Taiwan has been badly in need of some particularly good live performances. Thankfully, Taiwanese audiences have shown progressive proclivities and thrive on hip new Western music. 2009 Summer Rock Summit promises to offer a phenomenal musical climax as thrilling as skydiving naked from a helicopter above the Grand Canyon or as invigorating as driving a zero-emission electric-powered car. See you at the show!

No part of this publication may be reproduced, stored in a retrieval system in any form by any means, electronic, mechanical, photocopying, recording or otherwise, except brief extracts for the purpose of review, without the written permission of the author and copyright owner.

Taipei In A Day: Includes Taiwan From A To Z, First Edition is available here, Amazon.com and at Barnes andNoble.com. In Taipei the book is available at Cherry Valley Bookstore, Tienmu East Road, Lane 8, #99,Tienmu, Taipei (behind TAS)(台北市士林區天母東路8巷99號) (02) 2876-9293.Thank you again for making Taipei In A Day the highest-rated Taiwan travel book on amazon.com! --Scott
Posted by Scott Freiberger at 9:18 AM