Taipei In A Day Includes: Taiwan From A To Z NUMBER ONE in Category on Amazon.com!

Taipei In A Day: Includes Taiwan From A To Z is available here, Amazon.com and at Barnes andNoble.com.

Thank you again for making Taipei In A Day not only the highest-rated but also the NUMBER ONE highest-ranked Taiwan travel book on amazon.com! --Scott
Posted by Scott Freiberger at 12:31 PM

In Taipei In A Day Includes: Taiwan From A To Z I write in-depth about Taiwan's local culture so readers have a solid understanding of what to expect prior to arriving. I mention that, at times, visitors will find a land of stark contradicitons. Here's a case in point:

The news has been heavily covering the fact that McDonald's and Domino's Pizza will be fined between NT $60,000 (approximately US $1,800) to NT $300,000 (US $9,000) for not changing their cooking oil enough. In fact, one can't turn on the TV and watch the local Chinese news or open a newspaper these days without seeing a headline containing the phrase "tainted oil." The fines, which would hardly hurt these firms' bottom lines, are clearly to send a message to other chains that they should ensure that their cooking oil is changed more regularly. While it's prudent for Taiwan to be taking measures to ensure its citizens are safe, is this seemingly haphazard slap-on-the-wrist really the right approach?

Apparently, the Department of Health (DOH) decided to randomly test and subsequently fine these two chains "in a move to quell consumer fears over the safety of cooking oil used by eateries across the island." How is fining two U.S.-based chains going to make cooking oil used by eateries across the entire island more safe, especially considering that most people on Taiwan eat at small road-side stands? Wouldn't it be more practical for government inspectors to visit night markets around the island and test cooking oil used at these locations, considering that many, if not most, Taiwanese people eat foods prepared there?

Everyone knows too much of anything is bad for one's health. How about cutting the Golden Arches a little slack for once? What do you think?

Expect more random large chain testing and fines to come.
Posted by Scott Freiberger at 7:43 AM 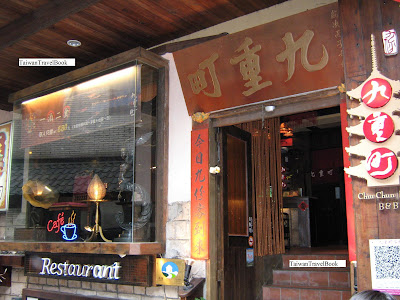 In Taipei In A Day Includes: Taiwan From A To Z explore the accommodations, attractions, eats, history and unique trinkets rife in Taipei County’s Jiufen (九份), located high above the northern Taiwan port city of Keelung.

Although the name of the restaurant/hotel (bed & breakfast) “Chiu Chunt Dint” may sound funny, the outstanding food, exemplary service and somewhat small yet cozy accommodations are not. Prices for meals are reasonable, ranging from NT $250 (approximately US $7.50) to $550 (US $16.50) for an entree, soup and a beverage. (My suggestion: try the curry chicken with hearty vegetables and cheese for NT $300.)
The hotel is currently running a special, NT $880 (approximately US $26.40) per person for an overnight stay plus two meals, a very reasonable price for a comfortable overnight visit. For those who’d prefer not to trek back into Taipei or beyond after a sojourn to Jiufen consider staying at Chiu Chunt Dint. Or, stop in for a meal, your tastebuds shouldn't be disappointed.

Ice cream and imported German beer, what was this vendor thinking? It's the perfect combination... for diarrhea! 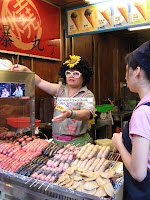 Taipei In A Day: Includes Taiwan From A To Z is available here, Amazon.com and at Barnes andNoble.com. Thank you again for making Taipei In A Day the highest-rated Taiwan travel book on amazon.com!

It has been a pleasure helping countless travelers to Taiwan enjoy their travels with greater ease.  Thank you to everyone who has provided a positive review of my guidebook and custom "Taipei In A Day (台北一日遊)" tour  based on my best-selling Taiwan travel book, Taipei in a Day: Includes Taiwan from A to Z,  I sincerely appreciate it.

Have fun and enjoy your time on Taiwan, and if you need a personal Taiwan guide, I provide custom "Taipei in a Day (台北一日遊)" tours based on my best-selling Taiwan tour guide!  Feel free to contact me via www.taipeiinaday.com for details.  --Scott
Posted by Scott Freiberger at 12:26 AM

The Neihu line of the Taipei Mass Rapid Transit (MRT) metro system is operational but currently plagued by electrical problems. During the first few months of operation expect heavy crowds and delays. One article mentions “a series of service disruptions.” Those heading to Miramar Entertainment Park would be wise to depart at Jiantan Station and take the free shuttle bus instead.
Posted by Scott Freiberger at 12:16 AM 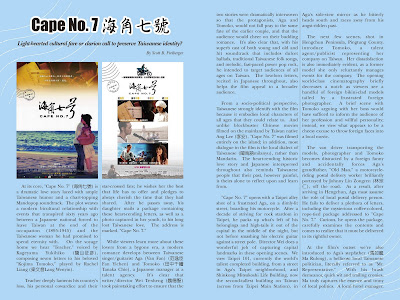 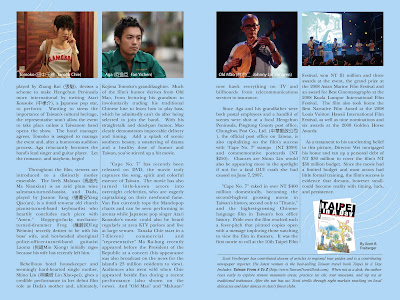 Taipei In A Day: Includes Taiwan From A To Z is available here, Amazon.com and at Barnes andNoble.com.
In Taipei the book is available at Cherry Valley Bookstore, Tienmu East Road, Lane 8, #99,Tienmu, Taipei (behind TAS)(台北市士林區天母東路8巷99號) (02) 2876-9293.
Thank you again for making Taipei In A Day the highest-rated Taiwan travel book on amazon.com! --Scott
Posted by Scott Freiberger at 6:36 AM