Ma, a former justice minister, Taipei mayor and KMT chairman, ran on a platform of "clean government" and economic change, themes which resonated with voters after the final four years of President Chen Shui-bian's (陳水扁) administration were marred by personal scandals involving his family and a lagging economy. Due in large part to economic concerns, the KMT trounced President Chen and his party in recent legislative elections, winning 86 of 113 seats. In the recent presidential election, Ma and his party won by approximately 17% of the vote, giving the "pan blue" camp control of both the executive and legislative branches. While many on Taiwan are elated that the new president will be able to implement his economic initiatives relatively unhindered, some on Taiwan, such as former President Lee, worry about the need for checks and balances in a democracy. Let's hope President Ma and his dedicated team can remain above petty political squabbles and remain focused on turning the economy around.

Born in Hong Kong (he and his family moved to Taiwan when he was one) and educated in law at Taiwan's top-ranking National Taiwan University and in the U.S. at NYU and Harvard, Ma held a high-profile news conference in English with local and international reporters immediately after his victory to answer queries related to his political and economic positions. He gave concrete proposals and demonstrated a pragmatic approach to working with allies as well as a keen understanding of some of the harsh political realities, namely dealing with Mainland China, that he will soon be facing. Ma Ying-jeou and his administration will take office on May 20, 2008.
Posted by Scott Freiberger at 6:58 AM 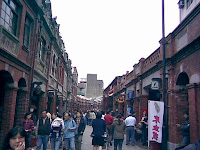 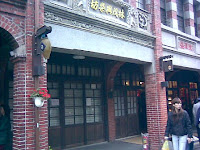 The main entrance to Sanshia Old Street immediately impresses with a historic temple to the right, across from the police station, which bears a unique brick wall with arches that have been in existence for over half a century. As you can see, the town has done a wonderful job of preserving the architecture of a bygone era. 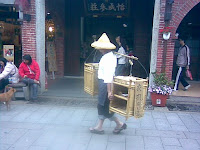 There are two main streets in the Old Street area, the main one of which, Minquan Road, is around two-hundred and fifty meters and boasts a towering temple as well as plenty of interesting food and trinket shops; another street that runs perpendicular to Minquan Road at the entrance is around fifty meters long and boasts another historic temple, Sanshia Zushih Temple (三峽清水祖師廟), at the end.

Many of the souveniers and shops on Sanshia Old Street, however, have a distinctness that is unlike those found on other Old Streets. Here you can purchase homemade soap, sweet grass juice, red bean or peanut-filled mwaji as well as croissants filled with, of all things, ice cream! There are also ample sausage vendors and a handful of noodle stands for light snacking. Here you can see how vendors once looked on Taiwan, selling their wares on the street, the man pictured above is a homemade soap vendor. 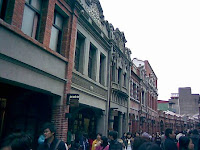 A visit here by MRT and bus shouldn't disappoint, after departing Yongning Station board bus 706, the bus ride (NT $15) takes around thirty minutes. Sanshia is only around twenty minutes by bus from Yingge Ceramics Museum (鶯歌陶瓷博物館) in Yingge, Taipei County, so if you're headed to Sanshia Old Street you may want to consider visiting both in the same day. 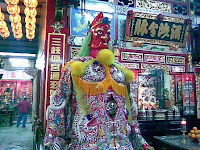 A temple God watches over all who enter Sanshia Old Street. Have fun and enjoy your time on Taiwan, and if you need a personal Taiwan guide, I provide custom "Taipei in a Day" (台北一日遊), tours based on my best-selling Taiwan tour guide!  Feel free to contact me via www.taipeiinaday.com for details.  --Scott
Posted by Scott Freiberger at 9:22 PM 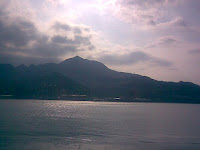 It's ironic that the tagline of the movie "The Sand Pebbles" is, "The story of men...who disturbed the sleeping dragon of China as the world watched in terror!" because it wasn't filmed in China, it was filmed here on Taiwan and in Hong Kong in 1966; many scenes were filmed in Danshui, Taipei County! In the movie only trees are visible on the towering Guangyin Mountain on Bali
(Taiwan's Bali, not the one in Indonesia) across the river from Danshui. Today, Bali boasts bright lights, scenic hiking trails, modern apartment complexes and upscale hot spring spas, a wonderful (yet somewhat pricey) water park, Bali Wharf, Left Bank Park and the Shihsanhang Museum of Archaeology.

Westerners were ridden around town on three-wheeled pedicabs or, as portrayed in the movie, carried around town by local guys pulling small wooden ox-cart carriages. In the scenes where the gunboat, the U.S.S. San Pablo, is surrounded by Mainland Chinese boats, the flags are those of Taiwan, the democratic Republic of China (ROC), not China, the communist People's Republic of China (PRC), although during that turbulent period in Taiwan's history Chiang Kai-shek had imposed martial law on the island. I delve deeper into Taiwan's history in my new traveler's guide, Taipei In A Day Includes: Taiwan From A To Z. 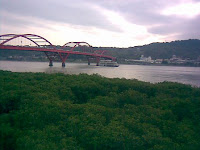 "The Sand Pebbles" stars Steve McQueen, Richard Attenborough, Richard Crenna (he later played Sylvestor Stallone's platoon commander in "Rambo"), and a very young Candice Bergen (of TV's "Murphy Brown" and currently "Boston Legal" fame). Crenna talks about going up and down the Yangtze River in China while we see Danshui, a bustling waterfront town in Taipei, and Guangyin Mountain on Bali across the river. The scene where a farmer is leading a large ox around a marsh is Hongshulin, where today people cycle from Danshui to Guandu and back along a serene bike route that runs adjacent to the MRT, alongside the Danshui River.

Some may find language used in the film to be offensive, the Westerners called the locals "slopeheads" and "coolies," and in one scene Steve McQueen remarked, "You slopeheads don't know nothin'!" "Slopeheads" is a derogatory (critical or disrespectful) term referring to people of Asian, especially Chinese, descent; "coolie" is a contemporary racial slur for people of Asian descent, including people from India and Central Asia. The term was originally used regarding Chinese railroad labor.

Overall "The Sand Pebbles" was a long (179 minutes) but surprisingly good flick, with an "intermission" (actually says "Intermission") where the film stops in the middle and soothing music plays, presumably so people in theaters could stretch their legs. What a remarkably different time, could you imagine "Rambo" stopping in the middle and hearing muzak (elevator music) so people could go to the bathroom and buy popcorn?
Posted by Scott Freiberger at 6:29 PM

Only a few years ago hordes of taxi drivers aggressively approached international visitors to inquire as to whether taxi service was needed, thus one could easily obtain a set fare of NT $900 to $1000 (US $27.00 to $30.00) for a cab without metered service. Now, however, due to stricter regulation and police enforcement, independent "rogue" drivers are few and far between, and patrons must queue at taxi stands in front of both airport terminals.

Happy traveling!
-Scott
Posted by Scott Freiberger at 8:14 AM

Taipei In A Day

Welcome! My name is Scott Freiberger and this blog is a supplement to my book Taipei In A Day Includes: Taiwan From A To Z, First Edition. If you have any questions or comments feel free to post them below, thank you.

Taipei In A Day (台北一日遊) is the most comprehensive, up-to-date guide to thoroughly enjoy Taiwan. Discover relics and know where to stay and play by using the included maps, complete Taipei dining, hotel, museum, night market, parks, temple and pub guides. Active globe trekkers will appreciate the detailed Taipei Guide to Mountain Climbing. For a soothing spot of tea, find serenity at Tea Station. Names and addresses are also listed in Chinese, along with local phone numbers, so major attractions and interesting out-of-the-way locales around the island are readily found. Helpful communication tips, important vocabulary and useful phrases are at your fingertips. The encompassing “Taiwan From A To Z” section introduces local cues, customs and important cultural information so readers can be travelers rather than tourists. After reading Taipei In A Day Includes: Taiwan From A To Z, First Edition you should be prepared for your visit, whether it spans a month, week, or weekend.


Taipei In A Day: Includes Taiwan From A To Z is available here, Amazon.com and at Barnes andNoble.com. Thank you again for making Taipei In A Day the highest-rated Taiwan travel book on amazon.com!

Thank you to everyone who has provided a positive review, I sincerely appreciate it. Have fun and enjoy your time on Taiwan!  --Scott
Posted by Scott Freiberger at 8:09 AM

Labels: "Taipei in a Day", Comprehensive Taiwan Tour Guide for Taipei, Taipei In A Day (台北一日遊), Taiwan and all of Taiwan
Newer Posts Home
Subscribe to: Posts (Atom)